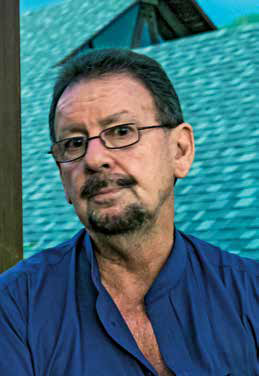 Glynn Burridge is of dual British and Seychellois citizenship and has been living in Seychelles for 35 years, much of those as part of the management team of D’arros Island in the Amirantes group, 140 miles south-west of the mainland.

Having grown up in Iran under the Shah (king), he took an honours degree in oriental languages from Manchester University before becoming commercial interpreter and translator in the Persian language (Farsi), English tutor to the royal children and private secretary to Prince Chahram Pahlavi of the Iranian royal family. Fleeing the Islamic Revolution, he moved to Seychelles and to the Outer Islands, in 1978 where, for two decades, he managed the Pahlavi’s private estate, Dárros Island.

Since leaving D’arros Island to live on the mainland in 1998, he has been engaged by Seychelles’ Tourism Board as sole copywriter behind all Seychelles tourism’s publicity materials. He is also a freelance copywriter, the author of ‘Voices’, the popular collection of Seychelles short stories and ‘Kolony’, a thriller based around the Seychelles Islands. He has also been a major contributor to the “Coco-de-Mer”, “SUBIOS: Seychelles Festival of the Sea”, “Carnival” and “Unexpected Treasures” coffee-table books.

His latest project has been as editor-in-chief for Seychelles’ newest history book: ‘A History of Seychelles from its origins to the present day‘, a beautifully produced, 460 pp colour, coffee table book featuring many hitherto unpublished documents and taking readers on a fascinating voyage through Seychelles’ history.

He is fluent in Creole, French, English and Farsi.

It wouldn’t have been hard for us to believe that Glynn Burridge was the prosaic modern-day avatar of 18th-century pirate La Buse, swinging fromthe mast of a sailing ship as he surveys the seas around the Seychelles archipelago for potential quarry!

The Seychelles-based Burridge is, in reality, a writer and a legendary figure in these parts.He sports a trim goatee and a fugitive grin. The bespectacled author is also a tourism consultant and freelance copywriter. But the magical setting of our freewheeling discussion—the terrace bar of the Avani Seychelles Barbarons Resort and Spa, canopied by a post-sunset sky—and the compelling nature of his narrative imparts an aura of mystery to his persona and his tales.

Burridge tells us that so effectively did La Buse (whose real name was Olivier Levasseur) secret away his ill-gotten stash of wealth—estimated to be some 150 million pounds—on Mahe, the main island of Seychelles, that even after 300 years and the sustained efforts of the most skilled treasure hunters, the untold riches still lie buried—“undiscovered, untouched”.

It is believed that the hoard consists mainly of religious artefacts—including a seven-foot high cross of solid gold and studded with diamonds, emeralds and rubies, known as the Fiery Cross of Goa. During La Buse’s time, pirates were superstitious—they thought the world was flat and any transgression would result in them falling off the edge of it. So, La Buse and his men decided against melting and disposing of the religious loot, choosing instead to bury two shiploads of it in the area now known as Bel Ombre on the north-eastern coast of Mahe.

But fascinating as these tales that Burridge narrated to us were, we were more enchanted by the stories of his own extraordinary life, which unfolded before us like a film of great cinematic colour and depth with the soundtrack provided by an azure ocean that relentlessly pounded the beach below.

The UK-born Burridge grew up in Iran during the heady regime of the Shah. He speaks Farsi and Dari fluently and was a tutor to the royal Pahlavi household. He also worked as an interpreter and translator. With the onset of the Islamic Revolution, he escaped to an island that the Pahlavi family owned at the time in the Seychelles—D’Arros, one of the outlying Amirante Islands. Burridge still thinks of Iran as his spiritual homeland, yet his love for his adopted one—the Seychelles, where he has lived for 40 years—resonates in every word he utters and writes. 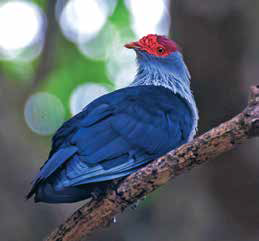 The blue pigeon of the Seychelles.

“For almost 20 years, we lived a huntergatherer lifestyle—for D’Arros was primitive then. We did not have filet mignon flown in, and ate what we hunted,” he says. Burridge realised that he had to capture his adventures in words for posterity. This spawned two books—Kolony (which he describes as a historical thriller), and Voices (an eclectic collection of short stories based on his experiences on D’Arros). “I was a landlubber earlier; on D’Arros I learnt how to dive, sail and explore the glorious world under water; there were no TVs, discos or hotels—only a radio on the island.”

Burridge learnt the hard way to play both doctor and dentist; to pit his muscles and will against the vagaries of nature on a remote island! Very often, they ended up cooking and eating sea in the gin-clear waters and relished giant mud crabs. “My best memories are of fishing for sharks at 2 am!” he reminisces. 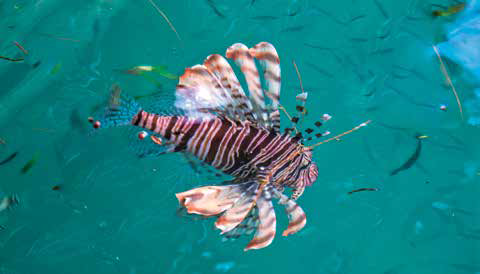 The exotic lionfish seen under the crystal-clear waters of Praslin island.

Some visited the island but left because they felt that the isolation on the 400-acre lagoonencircled isle would drive them mad. “I stayed there for 20 years—which says something about my state of mind!” laughs the author.

But it was a life on the edge, which often entailed feeling small and insignificant in the face of the unknowable, trackless ocean beyond the island—being helpless even when nature unleashed her fury and brimming with profound gratitude for her largesse.

Not surprisingly, Burridge’s stories are peppered with a potent mix of the bizarre and the truly fascinating—of ghosts and apparitions, of men battling nature in an alien environment, of being towed by a giant shark and of shipwrecked pirates evolving into a supernatural cult. 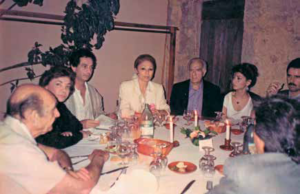 Old photographs of Burridge with members of the Iranian royal family.

He tells us how a group of buccaneers established a republic in Madagascar, a pirate haven of sorts, and called it Libertalia—the existence of which, till date, has not been established as either fact or fiction. It is believed that great pirates of the day passed through Libertalia and the infamous La Buse was one of them. Sporadically, La Buse continued his life of crime on the seas and was finally spotted working as the pilot of a ship in Madagascar. He was sent to the gallows on the French island of La Reunion (east of Madagascar) in 1730.

The deep timbre of Burridge’s voice, seemingly disembodied in the growing darkness, makes him seem like an ancient storyteller-cumhistorian talking about a lost, magical time. Our spines tingle in anticipation even as we sip cocktails in the course of a balmy Seychellois evening. The air is taut as a guitar string as he relates how his in-depth research on the pirates of yore landed him in strange situations. During a visit to London, a stranger called him up and said he wanted

to meet him. The gentleman drove him around in a fancy car, a couple of shady characters in tow,

and grilled him for several hours, trying to elicit information on La Buse’s hidden treasure.

“The car was filled with maps. At the end, they turfed me out with the words – ‘You have written more than you know’!“

Today, Burridge lives on a tranquil beachfront in Mahe and is an integral part of the Seychellois society that is just about 90,000-people strong. The Seychelles were uninhabited islands, devoid of predators—a benign environment that brimmed with tortoises as large as tables, multi-hued birds, flying foxes, forests and a variety of palm trees—including the one that bears the sensual coco de mer or sea coconut, said to be the largest seed in the world. This is perhaps why, Burridge believes, there is complete harmony amongst the Creoles (of French descent), Indians, 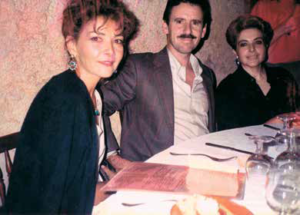 Old photographs of Burridge with members of the Iranian royal family.

Chinese and Africans—all of whom are immigrants to this beauteous land.

“Seychellois society also includes waifs and strays like me,” says Burridge, with his trademark wry humour. “The beauty of Seychelles is so potent, it overcomes racial barriers!” Tolerance and

harmony are grafted into the DNA of the people, Burridge says. “Ours is truly a rainbow nation, partly because no one feels that ‘I was here first and hence have more rights than the others!’ He says that in comparison, the rest of Earth is like a crowded boat at sea, with about 10 people who live the good life in the cabins, while the rest live on deck, battling the elements, struggling to stay afloat.

As Burridge makes his way out, he leaves us with a final enigmatic comment: “There’s nothing in my books that could not have happened…” he says, with the trademark glint in his eyes.

Yes, even the eerie stories as chilling as a ghost’s breath!

TREASURE HUNT
One of La Buse’s biggest heists was the capture of a Portuguese ship filled with treasures belonging to the Bishop of Goa and the Viceroy of Portugal. La Buse later settled in the Seychelles, where a chunk of this booty is believed to have been buried. The buccaneer was finally captured somewhere in Madagascar, and legend has it that when he was about to be executed, he flung a necklace containing a cryptogram into the crowd, and said: “Find my treasure, the one who may understand it!” But, despite all efforts, the treasure remains undiscovered!