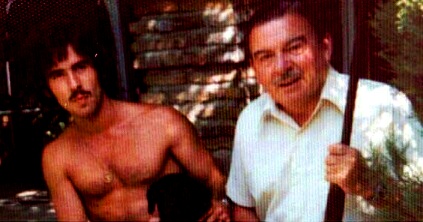 I recall a tangible happiness, like embers of a fire, crackling through our little home in the kuche as winter’s first snow began to cover the immaculate, embassy gardens in its cloak of silver. With my father’s golden, Somerset tones underscoring my mother’s melodic quips, I was swept along by love and attention as if in the current of some magical river, drifting from one enchanted moment to the next. I was totally happy in those early days, thick with the exotic ambience of the Orient which was destined to snare my heart forever and turn me into a lover of Iran: one love, among many others, that despite all these intervening years, I have neither forgotten nor relinquished.

To this very day, I can still cock my ear to the sound of my father’s boots crunching on December’s freshly-fallen snow and even feel once again the sudden chill as he would burst into the house from the cold through the squeaky, old fly-screen door, his bubbly personality frolicking ahead of him, like a wave to shore.

‘Fancy a drive out, Ghyn (which is how he called me)?’ after which we would take one of our long drives into the lower reaches of the Alburz mountains, often stopping for a delicious chelo kebab and steaming glass of chai, tea sucked, Iranian-style, through a sugar cube lodged between the teeth.

It was on this particular drive that I experienced one of the most remarkable conversations of my life.

It gathered momentum slowly, sometime after we had pulled gingerly through the embassy gates adorned by their majestic, twin lion and unicorn and out into the maelstrom of Tehran traffic, along Firdowsi Avenue, heading north. In Iran, we used to drive on the right and just pulling across the tsunami of oncoming vehicles to get into the right lane was death-defying. Back in 1972, Iran was seriously in the money thanks to its rich, southern oil fields and the consequent explosion of wealth, for some at least, had meant a massive increase in vehicular traffic that was gradually outstripping the city’s ability to cope.

We passed the famous Firdowsi carpet shops on our right as we approached the central landmark of Firdowsi roundabout, where the famous 11th century poet in flowing robes and raised hand stared down at the populace haughtily from his pedestal of polished stone.

Turning right, our progress became painfully slow as we made for the old Shemiran road that would first lead us through Gholhak and, much further north, onto the highway to Mashad, a city in the far north-east of the country.

Already more than twelve years in Iran, my father’s adventurous spirit had led him to acquire intimate knowledge of the city and indeed much of the country which he loved to explore on foot, horseback or by Land Rover. One of his treasures was a wonderful book he had come across detailing a wonderful account of walks which could be enjoyed in the Alburz mountains, near the volcano of Demavand and even into the eerie valley of Alamut, once stronghold of Hasan-e-Sabah’s Hashishin or Assassin Cult of the eleventh century. If I recall correctly, the book had been written many years earlier by a British diplomat at a time when diplomats still did their job and mixed with the local population; often so fluent in Farsi that it was impossible to tell them apart.

He had no need of the book now as he knew all the walks by heart. There was hardly a weekend when he did not lead a party of walkers of all nationalities to explore the countless plains, orchards, valleys, rivers, gorges and mountain villages of this magnificent land so rich in diversity, topography and culture.

On this occasion, we decided to take a drive to Lashgarak, a valley to the north-east of the capital through which snaked a river enclosed on either side by tall, willowy trees and positively leaping with rainbow trout. The burdensome traffic had thinned considerably by the time we were conversing in earnest and as my father began to question me about my plans for the future.

The previous year I had started a degree in Oriental languages at Manchester University, studying Arabic and Farsi (Persian) and it was going well, although I was leaning more and more towards the latter which I found incredibly expressive, romantic and soulful, especially the Iranian poets: Saadi, Hafez and Rumi; for me, to this day unrivalled for the impossible beauty of their language.

‘So, my son, is it all going well with your studies?’ He asked.

I filled him in on how happy I was at Manchester and how the four-year course was going well. I had met some great friends and so, socially, life was good as Manchester was a vibrant city with a great deal going on.

I remember his kind face breaking into a wide smile, perhaps in the knowledge that I had gone further than he who had left school at the tender age of sixteen but who had since gleaned a wealth of experience as mechanic, boxer, war-time soldier, farmer and now, transport advisor for the British Embassy in Tehran and the Middle East.

We came across a picturesque, roadside restaurant tucked away in a sheltered niche of the winding road and pulled in alongside the usual queue of long-distance trucks. We took a table not far from a log fire from where we watched snow slowly falling in a gossamer veil.

‘And, further down the road?’ He inquired.

I explained to him that my plan was to return to Iran to live and work just as soon as I finished my studies.

‘Yes, your mother and I recognise your deep love for Iran which is quite natural as we brought you here when you were still very young. Until now, you have never lived in England and it is understandable that you would wish to return to the country you consider home.’ I fancy he uttered the words with a certain sense of regret as he was due to retire to the UK soon, which meant that our paths would lead in opposite directions.

We sat quietly awhile, each one digesting not only the warm unleavened bread they had since brought us as we waited for our usual chelo kebab, but also the implications of what had just been said. We were a close family despite the fact that I now only saw my parents during the holidays and my plan would mean even longer periods of separation.

I was about to break the silence when the food arrived: double skewers of juicy, lamb kebab, roasted to peaty perfection over a slow charcoal fire and served on a bed of fluffy, steamed rice covered with sumaq and roasted tomatoes, a raw egg yolk and plenty of butter. Until today, my idea of culinary heaven!

I think for the most part we ate in silence before my father uttered something that, today, astonishes me far more than it even did back then.

‘It’s good that you speak their language and understand their culture, Glynn,’ he looked me squarely in the eyes as he spoke, ‘because in your lifetime you will have to fight them in the streets.’

Today, I have great difficulty reconstructing for myself how totally out of place and inappropriate his words were at that time. Then, as a naive young man, just starting out in life, they nonplussed me; today, they chill me to the bone for their uncanny prescience of events that would only begin to unfold, and very surprisingly at that, nearly a decade later.

It is not only what he said, but the way in which he spoke the words, as if weighed down by them and what they implied for my future in Iran. They seemed to exhaust him and I do not remember us continuing the conversation, which is not surprising as his words came totally out of the blue and were unsubstantiated by anything we were then witnessing in the everyday life of the country.

In 1972 the Shah was at the peak of his powers and, with the country’s enormous oil wealth at his disposal was on track to become the dominant regional power, if indeed he was not that already, and with ambitions to rekindle the ancient greatness of the Persian Empire.

At home, notwithstanding the undercurrents of discontent that tend to face totalitarian rulers, the king appeared to be in complete control and there was no manifestation of the orchestrated ‘Islamic’ fanaticism which has since claimed the Middle East in its entirety.

Against this backdrop of Iran and the region as it was then, for anyone to so accurately predict ‘fighting them in the streets’ within a mere decade, still steals my breath away.

In the years since then, I have not so much wondered about what my father said, because he could not have been clearer but, rather, the circumstances which had led to that fateful utterance. It is for sure that there were those in Iran opposed to the Shah who must have long harboured designs to bring him down but those plans would only come to fruition some eight years later and then only via the sudden, almost unexpected, spark and momentum provided by a hitherto almost unheard-of Khomeini.

This conversation with my father in that roadside tavern remains a great mystery and one I doubt I shall ever solve: how a man whose talents and skill set did not overly expose him to the world of politics, nor to interpretations of it, was capable of such a devastatingly accurate prediction of events that would ultimately topple not only the Shah, but unleash a fanaticism to change lives forever across the Middle East and beyond.