The little circus with a BIG Heart

The Little Circus with a BIG Heart

An orange sun sets, its rays caressing the taut fabric of a dark blue tent set at one end of Freedom Square in central Victoria where a phalanx of cars has formed, passengers slowly snaking into a line heading for the vestibule.

In the soft twilight of the interior, young men and women with dark, exotic features are ushering the crowd past candy floss, toffee apple and soft drink stalls into the giant tent’s inner sanctum, inviting them to sit in tidy lines before a central stage while a film plays on a screen in the background. The crowd is swelling now and with each new arrival, so is the atmosphere: all eyes on the mouth of a tunnel where dark shapes flit busily to and fro. A sudden rustle from within the tunnel draws a gasp from the crowd, heightening the level of expectation now swirling about the tent in an almost tangible cloud.

I do not know the little boy who is sitting next to me, whose age I guess to be around eight. His eyeballs have already swelled to a point where they dwarf the other features of his young face, his spear-like gaze scanning the name above the tunnel: The Magic Circus of Samoa.

As the crowd settles down with popcorn, soft drinks and coloured light sabres, the music changes tempo and, suddenly, the circus bursts to life with the grand entrance of Bruno Loyale, the circus’ founder, striding into the ring with the springy gait of a professional wrestler, his massive frame pounding the floor. The expression on the face of the little boy to my right tells me we’re on!

Now in its 10th year, the Magic Circus of Samoa is unique, making a point of not so much visiting towns and cities but instead performing on remote islands of the South Pacific, bringing its special brand of magic to children of all ages with little opportunity otherwise to enjoy a show.

Created to enable South Pacific islanders to share in the delights of an old-fashioned circus, the Magic Circus’ real home is in Pago Pago, American Samoa, and while it may lack the spectacle and big-ring glamour of a large circus like Ringling Bros and Barnum & Bailey, it most certainly succeeds in presenting a thrilling variety of quality circus acts, albeit on a more modest stage.

Founded by a Samoan, Bruno Loyale, the Magic Circus has traveled to almost all of the South Pacific Islands including the most isolated ones like Tonga, New Caledonia and the Marshalls & Solomons as well as the better known destinations of Tahiti and Fiji. Today, it is spreading its wings further afield to include, Seychelles, Mauritius, La Reunion and Mayotte, with plans to travel to the Caribbean before long.

After an eloquent introduction by Bruno, a spectacle in himself, his mighty torso etched in tattoos, a spotlight from somewhere in the roof of the tent captures the svelte forms of two tightrope walkers as they tip-toe impossibly up and down the wire, vaulting in turn each other’s quivering frames. Glistening from the effort, their bodies shine in the bright light, each face a mask of concentration as they defy gravity on the thin wire. The young beside me boy claps energetically.

The next act involves a hapless young man from the audience who is handcuffed to a long wooden board before a pretty knife thrower armed with a cluster of wicked-looking knives. Solemnly, he is presented as her target but, through clever sleight of hand, he is blindfolded just before each throw as each knife is planted noisily into the board behind him by the hand of a stage assistant. For the life of me, I can’t work out who looks more perplexed, the victim from the audience, or my young neighbor. Either way, they both seem mighty impressed. 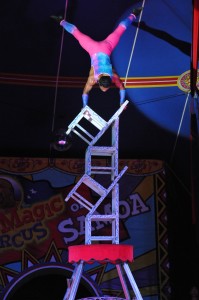 Humour is injected into proceedings via the clown – a magnificent midget who ‘talks’ by blowing a whistle but whose wide range of facial expressions makes him one of the most articulate members of the troupe. Throughout the show, he appears in a variety of disguises, ranging from a mischevious boxer pitted against a much taller opponent and determined to level the odds; a miniature Elvis Presley; the energetic conductor of a cow-bell orchestra and a match-maker between members of the audience whom he coaxes with his whistle into a number of intimate embraces. He is clearly a favourite with the kids who later queue up to have their pictures taken with him in his trademark ‘thumbs up’ pose.

Each new act carries all before it, transporting the audience to a place where laughter, oohs and aahs resonate, boys and girls scream with pleasure and adults guffaw. Bruno weaves a magic thread between acts with his powerful performance as master of ceremonies – every inch the circus maestro and most definitely in command. He says just enough as he introduces each new performer, retreating instantly into the shadows as the show begins and some new display of circus magic is born somewhere in the tunnel.

This time, it’s a pretty ‘Princess’ from India who nimbly climbs a rope to the very roof of the tent and then performs a series of elegant passes, suspended upside-down from a length of white tissue, body arced over itself, toes lightly touching her forehead, arms spread wide. Soon it’s the turn of an unlikely bunch of gymnasts dressed as a baby, a buxom nurse, a construction worker and a transvestite who proceed to trip over each other and a ‘blind’ spectator in a series of cleverly choreographed moves which leave the audience in stitches.

They are left breathless at the spectacle of the ‘rubber man’ from Ethiopia as he contorts his body in a way that defies the possible, threading it through the string-less head of a tennis racket, locking his shoulder blades and pushing his joints inside out to achieve one amazing feat after another. The boy next to me drops his candy floss onto the floor and, spellbound, does not seem to mind in the least that his feast is melting at his feet.

As the interval comes around, it’s anyone’s guess who is most in need of the break; the performers after their constant supply of miracles or the bleary-eyed spectators from watching them. As the circus gathers momentum for the second half of the show, a steady stream of onlookers climbs onto the stage to have their picture taken with the clown and then receive a memento of the occasion mounted onto a key ring for posterity.

We’ve barely caught our breath when the Samoan show is off again at a gallop: the human fountain from India first consumes vast quantities of water and then turns into a one-woman waterspout before swallowing no less than four live gold fish which she then regurgitates, alive and kicking, into a bowl; a young man with a body that would do a Michael Angelo model proud ascends a wobbly tower of stacked chairs almost to the roof of the tent before dismantling it again as he struggles to keep his balance.

Bruno makes an entrance and invites an onlooker to defy the sharp blade of a guillotine, silencing the crowd as he holds the blade by a string before letting it fall onto, and right through, the young man’s neck, who walks away unscathed. In an ecstasy of excitement my young friend has just trampled the candy floss into the grass beneath his feet.

One young lady dancer catches two torches burning at both ends and proceeds to wield them in a fire dance, twirling them around her as she leaps wildly about the stage while a contortionist from Nepal holds burning candles with both arms and feet (and even on her forehead) as she rolls from one incredible posture into another.

Hello, Bruno’s back! This time with some cunning feats of magic, pulling lighted cigars from a young boy’s ear before the show makes way for the one-wheeled cycle riders, including one act on a crazy, zig-zag bike and another on the world’s tallest monocycle as the crowd bellows its approval.

Almost mercifully, the tempo slows with some traditional Samoan dances, but that just proves to be the calm before the storm which takes the form of some insane motorcycle riding inside ‘the dome’ where two riders hurtle past, beneath and over the top of one another at close to full throttle. By now, my young friend has grabbed my hand and is squeezing it like a lemon, his jaw somewhere down near his fallen candy floss.

Bruno springs to the stage to bring the show to an end and to invite all the performers to take a final bow. As the cheers finally subside and we wend our way outside, we are all left with the indelible memories of a magnificent performance by a team of true professionals and, although night has by now fallen, many I’m sure will have joined me in hoping that it will be a very long time indeed before the sun sets on the remarkable feats of the Magic Circus of Samoa.