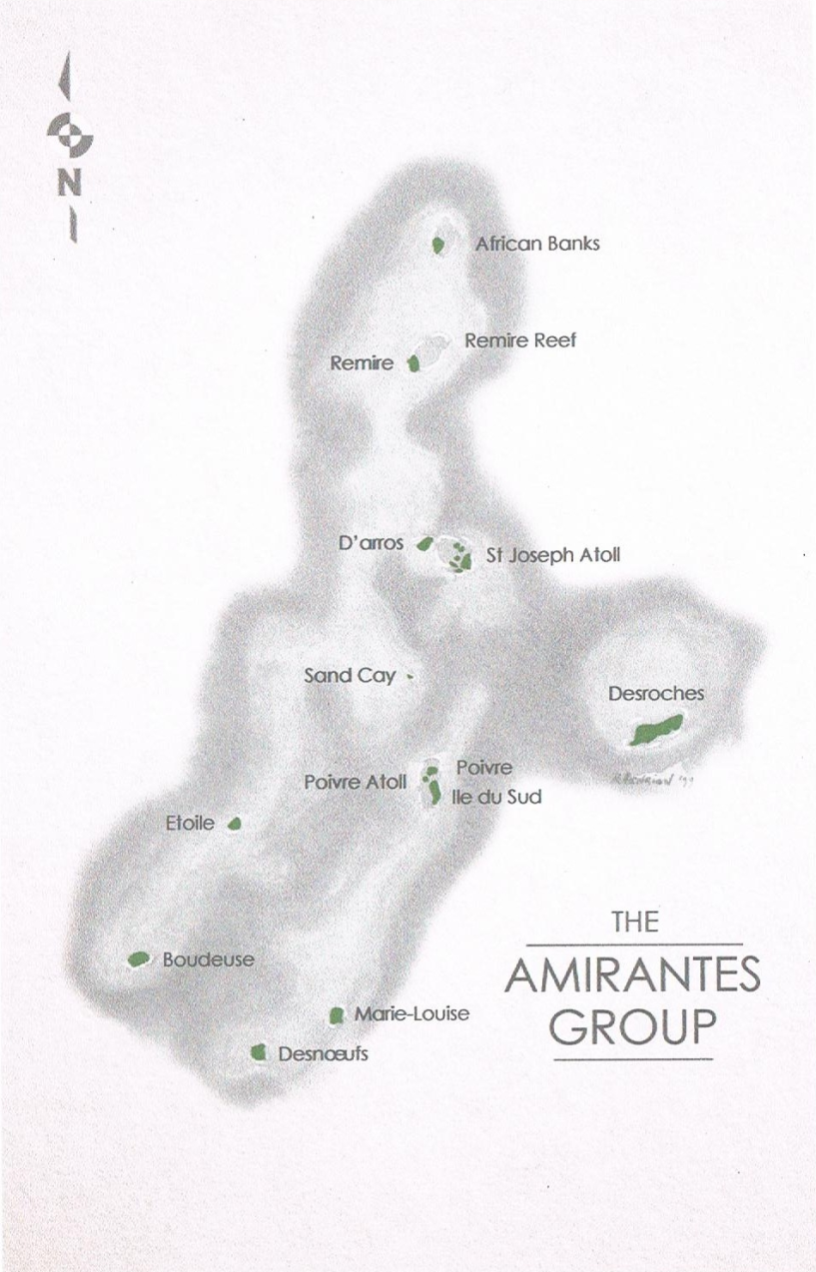 The Amirantes Islands are the nearest coralline island group to Mahé and lie on a shoaly and shallow bank running 150 kms north to south and roughly 50 kms east to west. Shaped like a drooping necklace, they are separated from the Seychelles bank by and 80 km wide trough of 3-km deep ocean.
Traditionally a tricky prospect for navigators, as borne out by warnings in numerous maritime instructions, the bank is characterised by an irregular bottom which can rise to as little as 5 meters before falling away again. A veritable nightmare for the unwary mariner.
These islands were given their name in 1502 by the celebrated Portuguese mariner Vasco de Gama during his second voyage to India and appear on subsequent maps as As Ilhas do Amirante or the isles of the Admiral. However, it is certain that, for example, the first intrepid Arab explorers of the Indian Ocean knew of them and probably even used them as places to lie up and repair their ships. Many references to the Jazayer az zarrin (Golden Islands) appear in their literature, pointing to the fact that they were very familiar with the Seychelles, even in the case of Aldabra, bequeathing it an Arabic name, ‘the rock’. The western Indian Ocean they referred to as the Bahr Al Zanj (Sea of Blacks) which has a distinctly predatory ring to it, in keeping with their excursions to find and carry off slaves.

The Arabic names they gave to places they visited clearly displays a long-term interest in the area: Qamr-Comores; Dina Arobi – Rodrigues; Dina Mazore – Mauritius; Dina Margabin- La Reunion; Al Khadra – Aldabra. There is even speculation as to whether the cultivation of the coconut palm found throughout East Africa and elsewhere might not have been a commercial project started by these early Arab voyagers.

Other, even earlier, visitors might well have been the natives of the Sula Archipelago in Indonesia who sometime between 200 and 500 CE, a wave, or perhaps successive waves, of Indonesian sailors riding outrigger canoes left their home in the Sula Archipelago and travelled on the westward current which would eventually lead them to their new home in the island of Madagascar. Whether they navigated themselves or travelled as subordinates of other Malay sailors, perhaps from Borneo, or whether they detoured via Africa before settling the island is uncertain, but their path would have taken them close to Seychelles. Faublée, in a 1983 document, insists on the presence of such a current – the very same that often brought debris from the far eastern theatre of WW2 into the western Indian Ocean.

Even though historical records of this area do not extend back more than a few hundred years, credible historical sources such as the famed Herodotus, refer to Egyptian maritime expeditions sailing around the African continent as early as 3,500 BCE which raises the interesting question of whether the odd vessel from such expeditions, even though they would not have (intentionally) strayed far from the coast, might have happened on these islands in distant antiquity?

The same applies to the extraordinary Chinese Treasure Fleet of Admiral Zheng, sent to explore the world by the third Emperor of the Ming dynasty. This massive fleet whose size and numbers were not equalled until World War 11, conducted several expeditions into the Indian Ocean in the 1420’s and, judging by their inclusion of Seychelles in their sailing journals, they were certainly aware of the location of these islands, and where, off African Banks, lead coffins with Chinese inscriptions have recently been located.

One of the first written accounts of the Amirantes comes from the account of Captain Alexander Sharpeigh who arrived on a vessel of the East India Company in 1609. They visited nine islands in all and found them to be uninhabited although they did find signs of ancient settlements in the form of old stone walls dating back a century, begging the question who might have, perhaps, once been shipwrecked there?

Pirates of the 18th century and even earlier, whose main base was the island of Madagascar, would also have been familiar with Seychelles and one of their number, Olivier le Vasseur, is believed to have concealed a fabulous and as yet undiscovered treasure there, is said to have arrived in Seychelles in around 1720 with 3 ships. Another notorious pirate, John Taylor, is reputed to have concealed the treasure he seized from Nossa Senhora do Cabo in 1721, on an atoll in the Amirantes.

When, after mounting a number of voyages of discovery, the French finally established a settlement on Mahé in 1770, the settlement of the Amirantes, its closest neighbour, was only a matter of time. D’arros Island was named after Baron Dárros, the commander of the marine at Ile de France in 1770-71 while neighbouring Desroches Island received its name from Monsieur Desroches, Governor of the Ile de France between 1767 and 1772. Further south, Poivre Island is the namesake of Pierre Poivre famous botanist and Intendant of Mauritius from 1763 to 1772.

When, in 1814, Seychelles, until then a French colony, was formally ceded to Britain under the Treaty of Paris, the authorities on the mainland were quick to recognise the value of the natural resources of the Amirantes: bird eggs; salted fish and seabirds; coprah; turtle meat; guano and some cotton.

These remained the focus of activity on the Amirantes until the latter part of the 20th century as concessions for the exploitation of these resources were awarded to individuals who set up camp on the islands with a contingent of contract workers from the mainland under the authority of a commandeur who would maintain discipline, manage the island stores and allocate tasks. So was born the tradition of the Ilois, or outer islander, who forsook the comforts of family life on the mainland to eke out a living on these remote and primitive outposts whose only lifeline was the schooner from Mahé which would bring provisions every three months or so. Many lived and died on these islands and were buried in the island cemetery where a name on a simple headstone remains the only testament to their solitary existence.

The slow pace of life on these islands continued largely unaltered until 1977 when changing political fortunes on the mainland saw the administration of many of the outer islands pass under the administration of the Islands Development Company (IDC). In the Amirantes, airstrips were built on Remire to the north, Desroches in the east and Marie-Louise to the south. Dárros and the St. Joseph atoll has been in private hands since 1975 and developed as a private estate and is currently owned by a Saudi Prince. Desroches Island is currently home to the newly open Four Seasons Resort Seychelles at Desroches Island, an upmarket hotel with a comprehensive suite of amenities reflective of the Four Seasons brand.

Slowly, and to a certain degree regrettably, this exquisite group of islands is emerging from its slumber of ages to take its place in the modern world. As inevitable as it may be, let us hope that the long-term splendour and ecological sustainability of these islands is not compromised and that their beauty continues to dazzle us for many years to come. 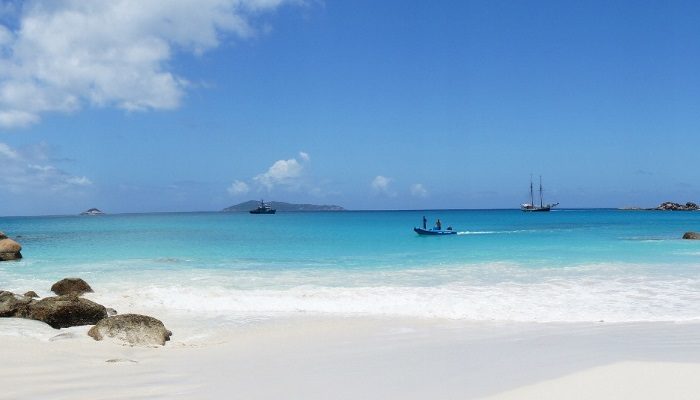