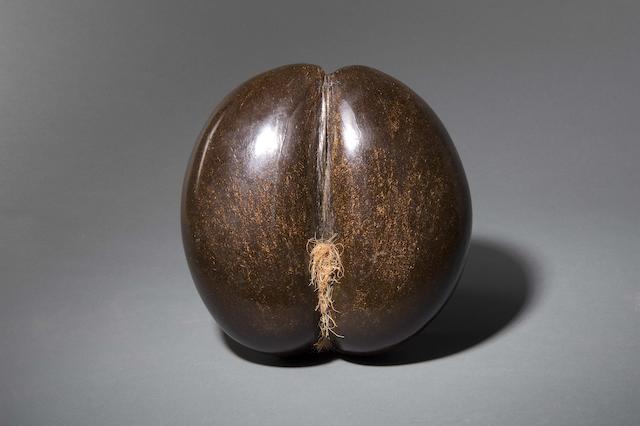 The mysteries of the fabulous Coco-de-mer

I recall as if it were yesterday my first fateful (as it would turn out) encounter with that most iconic member of Seychelles’ flora & fauna, the fabulous coco-de-mer. It was during a burning hot summer on the south coast of Iran and my travelling companion and I had stopped outside of a café in some dusty, mud-caked village to stretch our legs after a long stretch in the car. We had just bought a couple of Coke’s when we were stopped in our tracks by a dervish, a member of an itinerant sufi religious order, braving the searing midday heat to look for some charity.

We must have appeared as exactly what he was looking for because he strode up to us purposefully wearing the strangest of objects slung about his neck: the hollowed out bowl of what appeared to me to be some kind of hardened gourd, elaborately carved and inlaid in places with what might have been pieces of sea shell. Some years later, I would recognise it as half of a coco-de-mer nut hollowed out to become a kashgool or dervish’s begging bowl.

Fascinated by the ensemble of this bedraggled, Islamic version of John the Baptist and the exquisite bowl he bore – I remember questioning him about it as I fumbled for some loose coins to deposit in it. To this very day, I remember his reply.

“This, young sir, is one half of a nut that grows on a mighty tree on the ocean floor.”

Only a very few years later, when the upheaval of the Iranian Revolution would force me to leave Iran, where I was then working and where I had grown up as a child, in favour of the Amirantes Islands of Seychelles where my Iranian boss had bought an island, would I be reunited with the coco-de-mer in Praslin Island’s Vallée de Mai, where it still grows in a hidden glade.

I often wonder if my earlier encounter with the nut back in Iran was not the very first breath and inkling of my changing destiny…introducing me in some subtle way to life on these islands that would, all too soon, become my new home?

After all, this nut that now features on Seychelles’ coat of arms, is reputed to have the very strangest of properties.

The coco-de-mer is indeed shrouded in mystery and even though for centuries it had washed up on the shores of those countries bordering the Indian Ocean – from the Persian Gulf and Maldive Islands to as far as the East Indies – nobody had the foggiest idea where it came from.

The exotic and highly suggestive form of the nut which can weigh between 10 and 20 kg, making it the heaviest seed on the planet, was a major contributor to this mystery and one that soon placed great value on the nut. Inspired by the presumed aphrodisiacal properties of these strange apparitions from the ocean possessing the exact form of the female pelvis, the rulers of Maldives claimed exclusive property rights over the nuts, cutting of the hands of anyone failing to turn them in.

Over time, the coco-de-mer continued gaining a reputation as a potent cure-all for the treatment of stomach ailments, boils, poisoning, epilepsy, bowel and nervous disorders and heartburn. Portuguese navigators of the 16th century brought back news of the nut to Europe where it too became a highly- prized and much sought after artefact, fetching princely prices among European nobility, certain of whose private collections still feature examples of exquisitely inlaid and bejewelled nuts.

The mysterious bubble surrounding the provenance of the coco-de-mer burst shortly after the first official settlement of Seychelles in 1770. This was when a surveyor in a French party of exploration of Praslin and the surrounding islands happened upon the hidden forest and home of the coco-de-mer where the sight of thousands of towering palms bearing the nut greeted him. Further exploration showed that, at that time, the palm also grew on Round, Curieuse, Chauve–Souris and St. Pierre Islands.

These fabulous trees rank among the oldest and tallest palms on earth and some are claimed to be 800 years old, soaring with ruler-straight, smooth clean trunks to 25 metres in the case of female trees and 30 metres for males. The enormous, fan-shaped emerald green leaves are, at 5-8 metres in length and 3 metres in width, the largest in the vegetable kingdom.

On occasion, a coco-de-mer palm can support 180 kg of nuts at a time with the growing nut shaped like an enormous green heart. The fruit takes roughly 7 years to mature but, if picked at 9-12 months, it produces a sweet, pinkish-white jelly which was once a popular dessert. The produce from these palms has long been used to furnish a huge range of useful household items such as bowls, trays, plates, mugs, scoops and cups known widely as Vaiselle de Praslin or Praslin crockery. Meanwhile, local fishermen use the half shells as balers and water gourds, builders use the giant leaves to make thatched cottages and the leaves are also used to fashion screens, baskets, mats and hats.

So impressive is the sight of the female and male coco-de-mer: the one with its nut shaped exactly like a female pelvis and the male counterpart with its phallic-shaped catkin that it comes as little surprise if, together, they have inspired sinister versions of local folklore.

In the not too distant past, some locals believed that propagation of the species took place through physical lovemaking between the trees who would reach across the pathways to join in a passionate embrace and that anyone witnessing this would die on the spot!

General Gordon (of Khartoum fame) was hugely impressed by the sight of the Vallée de Mai when he visited in 1881 to study the possible fortification of the islands in the event of a French attack – to such an extent that when he returned to England he argued forcibly that the islands were the site of the biblical Garden of Eden and the coco-de-mer its forbidden fruit!

Now, as one of Seychelles’ two UNESCO World Heritage Sites, the Vallée de Mai continues to enthral the constant stream of visitors it receives beneath the cathedral-like expanse of its over-arching palms – still inviting us, after all these years, to ‘join the dots of creation’ as we drink in the spectacular site of Mother Nature appearing to imitate, so intricately and accurately, aspects of our human form.