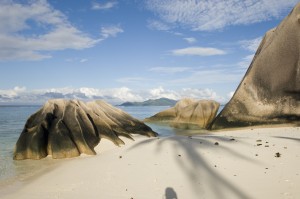 We increasingly live in a world cluttered with brands of cars, clothes, food, accessories and, in fact, just about anything you care to care to name. Very little escapes the pressing need to be branded with a specific personality which, hopefully, differentiates branded items from their competition.
In our busy modern world, it is not at all surprising that branding is big business with major companies specialised in the art of spinning fresh, new corporate personalities seated atop a pyramid of artistic directors, creatives, graphics designers and copywriters, all helping to stir the magic brew.
At the outset of the international tourism industry at the end of the last world war, relatively few destinations were consciously and actively engaged in tourism but today that situation is standing on its head whereby just about every nation on the planet is in the marketplace.
Seychelles got on the bandwagon relatively soon after the birth of its tourism industry which happened at the official opening of its international airport in 1972. Its first tourism brand was ‘unique by a thousand miles’ and even today you are hard pushed to find anyone who does not admire that strapline for the way it perfectly captures the spirit of Seychelles as a remote oasis far from the madding crowd and very different from everywhere else.
The catchy Seychelles slogan proved to be enduring and lasted pretty much until the famous black and white campaign of the early millennium which positioned Seychelles as ‘as pure as it gets’. This campaign was controversial in so far as it chose not to represent Seychelles in colour but rather in classic black and white images to emphasise its high-end appeal. The campaign rolled out with the help of a major international advertising agency was, generally speaking, a hit and its blend of ingenuity, and the stunning, carefully-crafted visuals that fuelled dynamic international marketing campaigns, turned heads.
As pure as it gets continued to do its job until a change at the Tourism Board in 2006 occasioned a fresh look at the brand, identifying a need to align it once again with colour. With the help of the Union, a prominent Edinburgh advertising house with Seychelles connections, extensive work was undertaken in consultation with Seychelles tourism stakeholders to identify the future direction of the new, national tourism brand.
What emerged was ‘The Seychelles Islands…another world,’ a proud return to colour imagery and slick strap lines which placed emphasis on the Seychelles islands as a multi-faceted, diverse destination very much akin to a lost Jurassic world: secluded, pristine and brimming with life above and beneath the waves.
It worked beautifully and the slogan, accompanied by breath- taking colour visuals and a suite of much admired collateral materials, has helped position Seychelles as a popular destination for the discerning traveller. It has also broadened its appeal to target a new demographic of traveller who is looking for an affordable vacation, thus breaking the perception that Seychelles is only for the rich and famous.
Each of its brands has played an important role in the growing population of Seychelles as a sought after holiday destination and one can only wonder what direction will be taken when rebranding time comes around once again?