Letter to America on persisting with regime change in foreign countries 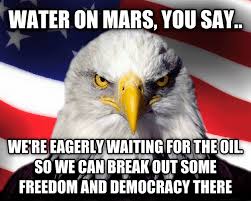 What about those pushing for regime change in yet another sorry middle eastern country actually having the foggiest idea what you are doing? What about taking stock of the fact that this has never worked until now and has only succeeded in reducing the Middle East from a cradle of civilization to a barren wasteland in a matter of decades?
What about taking time to educate yourselves and develop some kind of inkling about the cultural, historical, ethnic and geographical nuances of the countries you are meddling with like someone going at some poor sod’s brain with a blunt screwdriver, telling him you are performing vital brain surgery?
What about considering that trying to sprinkle democracy over ancient feudal/tribal systems like parmesan over pasta does not actually work; it simply creates a vacuum which vicious new players with very undemocratic agendas (who you in your bumbling stupidity never even knew existed) can occupy, unleashing fearful new forces on the population just as we have witnessed in Afghanistan, Libya and Iraq. How many times does this have to happen before you get it??
What about taking a good, hard look at the levels of education/ literacy/ cultural preparedness of said country to be able to effectively understand/ assimilate and take to heart the very foreign concept of western-style democracy in a way that does not provide yet another dictator (either local or foreign) with a long-awaited platform to impose fresh, unthought-of tyranny?
What about ceasing to cry crocodile tears for the poor downtrodden masses in the countries you are ‘targeting’ because you have aligned yourself with the sleaziest dictators on the planet when it has suited your purpose, piggybacking shamelessly on popular suffering to further your own selfish ends at their expense? What about your heart bleeding a bit for the Palestinians who you have helped Israel bully for over half a century?
What about stepping back and allowing nations to develop their own solutions to their own problems in their own way and in their own time rather than trying to ‘liberate’ them into some new nightmare which, thanks largely to you, has become the tragic case throughout the Middle East.