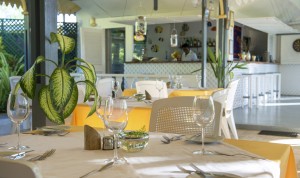 Seychelles – a taste of four continents
By Glynn Burridge

If, as is often argued, a nation’s gastronomy is its most influential ambassador, then nothing can do greater credit to the Seychellois Creole culture than its divine cuisine.
Seychelles is all about diversity – harking back to a time in the mid-eighteenth century when this archipelago of over one hundred islands, still slumbering in its first innocence, was settled by a prophetic assortment of ‘fifteen whites, five Malabar Indians, seven African’s and a negress’.

The original French settlers brought with them their legendary skills in the kitchen and their aromatic blend of spices and herbs which they adapted to an island life where seafood was abundant, meat less so and vegetables somewhat scarce. Necessity being the mother of invention, one way they achieved this was by using fruits as vegetables. This is why one finds particularly coconut, mango, papaya, pumpkin and golden apple prepared as chutneys to accompany tangy salads as well as dishes of pork, chicken and beef and, of course, fish, shellfish and crustaceans in all their Seychelles splendour.

To ubiquitous French tradition was added a certain British influence, evident in the Creole’s evergreen love of tea, cakes, custard, crumbles (and corned beef) but this was mild in comparison to that of the Chinese and Indian workforce arriving in the mid-1800s. The Chinese contributed their love of noodles and rice dishes with steamed fish and vegetables while the Indians introduced a variety of curries, beans, chillies, dhals, kebabs and the many piquant flavours of home. Meanwhile, via liberated Malagasy and African slaves, came velvety coconut milk, cassava and banana infusions.

Down the years, a melting pot of culinary techniques has taken root in Seychelles to mirror the varied ethnicity of its population, producing the grand symphony of flavours, tastes and textures which we know today as Creole cuisine.

Its array of enticing, colourful dishes, served against the backdrop of the islands’ unmatched natural beauty, lends quite another dimension to being a ‘foodie’ – one that will call you back to these islands time and again.

As you might expect of such a kaleidoscopic destination, great places to eat can be found in the five-star cocoons of top international hotels but also in the intimate atmosphere of the smaller Seychellois hotels and restaurants where Creole fare is popular. Stand-alone restaurants, often in stunning settings, are many and dotted throughout the islands, serving a wide range of international favourites including Indian, Chinese, Japanese and classic French and Italian cuisines.

Beachside restaurants offer excellent seafood and an unforgettable, feet-in-the-sand experience as well, aligning you with the true Seychellois island lifestyle, while an assortment of bars and bistros serve great coffee, snacks and ice-creams for those on the run.
Seychelles is proud of its culinary heritage. Night bazaars and other nooks and crannies will introduce the curious visitor to local delicacies such as boudin (blood sausage), freshly BBQ’d fish and kebabs, homemade cassava and banana chips, graton (pork crackling) as well as tasty desserts in the form of cloying almond nougats and caramelised papaya. You might even be tempted to wash them down with a local fermented brew of la puree or bacca as you try your hand at a moutya – the once-forbidden dance of slaves – before an open fire, to the primal beat of a goat-skin drum and the soughing of the waves.

Auberge – ‘Chez Plume’
Few restaurants in Seychelles can boast the pedigree of Chez Plume, resting in full view of the Bay of Anse Boileau on Mahé Island’s scenic western coast.

Renowned for its fine dining, Chez Plume’s dinner menu, named in honour of an expansive French adventurer and African traveller who once owned the restaurant, has remained much the same for the last 25 years. Its loyal clientele who continue to frequent this iconic restaurant after a recent change of ownership speaks volumes of the way its reputation and standards are being maintained.
The signature dishes of this 80-seater, open-air restaurant include succulent ginger crab; whole grilled snapper à la Creole; white fish fillet (capitaine blanc) with passion fruit sauce and breadfruit croquettes; locally caught lobster and fresh clams fished straight from Anse Boileau Bay. Rare local treats such as roast fruit bat also grace the menu as does a selection of freshly made jams and choice vegetables from the restaurant’s very own vegetable garden.

If you’re looking for a memorable lunch, Chez Plume is the place for a choice of pastas, a genuine Caesar or Greek salad, a succulent steak, plate of juicy ribs or prawns on a skewer washed down with a frosty local Seybrew beer or glass of Louis Moreau Chablis. Dessert includes the famous souffle passion, which will surely bring you back for more.
Anse Boileau. Tel.+2484355050 Facebook/restaurantchezplume   www.aubergeanseboileau.com

Le Bistro
Nestled in the leafy suburb of Mont Fleuri, just opposite the Botanical Gardens, on the outskirts of the capital Victoria, lies a new Bistro on the top floor of the Alliance Francaise building and run by Seychelles premier supermarket with access to the finest local and international produce.

Serving breakfast and lunch, Le Bistro has struck a chord with local foodies in search of a convenient, characterful place to dine in attractive surrounds that offers value for money. Le Bistro’s simple but appetizing menu includes swordfish rillettes, seafood gazpacho, slow-cooked shoulder of lamb and an excellent island-style tuna curry followed by coconut crème brule and coconut mousse with mango jelly. As might be expected of an island like Seychelles and the availability of the finest quality fish, Le Bistro also offers Seychellois grouper bouillabaisse with its fresh homemade rouille.

For those visiting Victoria and looking for a chic, intimate atmosphere and a great menu, Le Bistro will not disappoint. Proposing ‘a taste of France in Seychelles’, top Trip Advisor ratings attest to Le Bistro’s growing popularity especially among those in search of an ideal venue for an ìnformal business lunch with snappy, friendly service or for that rendezvous with a difference.
2nd floor Alliance Francaise Building, Mont Fleuri Rd. Tel.+248 2537803 Facebook/LeBistroseychelles

Bravo!
Mahé’s Eden Island is a one stop shop for visitors, offering great scenic views of the marina, shopping opportunities in the island’s only mall and a fine choice of restaurants of which the centrepiece is undoubtedly Bravo! a south African styled bistro with an extensive menu right on the waterfront and with a commanding view of its stunning mountain backdrop.
This is a place for all the family with a special kiddies’ menu sure to put a smile on young faces almost as wide as their parents as they contemplate a wide range of classic salads, delicious starters, wholesome pizzas, juicy burgers, pastas and awesome seafood stackers, sashimi, curries and platters. You’ll want to stay for dessert which includes sundaes, mousse and cheese and black forest cake. Bravo! also serves fresh juices, spirits, cocktails and wines to top off your day at one of the coolest places on the island.
Eden Island. Tel. +248 4346020 Facebook/ Bravo Restaurant